;  Psalm 22; ; .
… crucified under Pontius Pilate…   “Certainly this man was innocent.”
The Revised Common Lectionary splits the traditional Palm Sunday in two, having a Liturgy for the Palms on Palm Sunday, but also for the same day a Liturgy for the Passion, which includes a reading of the entire Passion narrative.  I have separated these two and give the Liturgy of the Passion on Good Friday.

Good Friday (The name is, of course, high holy irony!)  The Lectionary readings for Good Friday are the most awesome of the Suffering Servant passages from the prophets, psalms, and epistles.  These readings remain the same every year.
The Lectionary also specifies that John’s very public Passion narrative be read on Good Friday every year.  However, Year C is dedicated to Luke’s Gospel, and it seems better to stay with it here also.
So here we will listen to Luke’s way of telling the climax of the mission of the Suffering Servant.
Isaiah 52:13-53:12.
This prophetic reading is the climax of the Suffering Servant songs in Isaiah (see also 42:1-9; 49:1-6; 50:4-11).  Like the other Good Friday texts, this is a complex passage about an enigmatic Servant of Yahweh who suffers because of the sins of others.  Its conclusion is a triumphant outcome on the other side of profoundly moving suffering.
I am not going to repeat the detailed literary analysis I have given in previous years, nor the explanation of how the Suffering Servant, a royal figure, is a profound reshaping of ’s historical destiny. 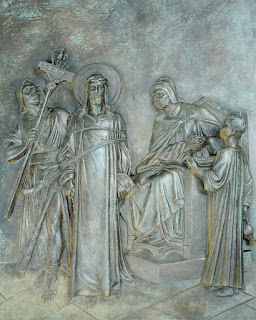 DrJay66
JW = Jay Wilcoxen. I taught Bible at the University of Chicago Divinity School for 20 years, then spent 14 years in hospital management. In semi-retirement I was Chief Financial Officer for Protestants for the Common Good for 13 years, and began to write Lectionary Studies there. In 2011, I wrote a series of reviews of Study Bibles, which are now available on the JW Study Bibles blog, along with studies I have done more recently. My mission has been to advocate for the plain and historical meaning of the Biblical texts, as presented in the Revised Common Lectionary.