Isaiah 2:1-5; Psalm 122;  Romans 13:11-14; Matthew 24:36-44.
The liturgical year begins with visions that place the world under God’s judgment.
(For an overview of Lectionary readings in Advent of Year A, see the Special Note below.)
The Christian year begins with the imagery and symbols of Zion and its king.  In Jewish tradition the covenant of Sinai dominates all later developments of tradition.  In the emergence of Christian faith, the Zion tradition, with its centrality of city and king (Messiah, Christ), is finally most decisive for Christian self-definition.  Thus the first word of Advent is about Zion (Isaiah) and the coming fate of the holy city (Matthew).
Isaiah 2:1-5.
The first reading from the Prophets for the Christian year is one of the most dramatic components of the ancient Zion tradition.
The old Zion tradition.  The Zion tradition was the visionary world of the temple city of Jerusalem, a city that was already many centuries old when King David captured it and made it his capital.  (Jerusalem is mentioned in Egyptian texts of the 19th century BCE, a thousand years before the time of David.)  David turned the city into his own by proclaiming to the religious circles there that it was Yahweh, his God, who had empowered him to capture their city and rule over the surrounding nations from there.  They in turn possessed traditional religious language to express the vastness and the cosmic significance of the God who had made David the ruler of the nations.
The religious visions of Zion emphasized the divine quality of righteousness (zedeq, in names like Melki-zedeq, Psalm 110:4; Adoni-zedeq, Joshua 10:1; and Zadoq, the Jerusalem priest who served both David and Solomon, I Kings 1:34).  Those visions carried on an ancient heritage of the pre-Israelite world and later gave it world-class expression, glorifying the little temple-city that became the famous “City of David.”
Our passage announces a “word” that Isaiah “saw,” more literally “envisioned” (ḥāzāh).  It is a vision of things in “days to come” (verse 2, NRSV).  The vision unfolds in stages:
First, the mountain of the house of the Lord will be elevated, will become obvious as the peak of the world mountain on which the most important holy events occur.
Secondly, when the mountain has become conspicuous, the peoples will see it and will “stream” to it, like water flowing up hill.
Thirdly, we hear why these people flow to the house of the God of Jacob.  It is because “instruction” (torah) will be available in Zion.  There, God will “judge between the nations, / and shall arbitrate for many peoples” (verse 4).  The holy city on the hill will be the source of infallible justice (“righteousness,” zedeq).
Finally, the result of having their disputes settled by supremely wise adjudication is that people no longer need or want to fight wars.  The demand for swords and spears will drop dramatically, and blacksmiths far and wide will be turning the tools of war into the tools of agrarian life.  Zion, in its revelation of the last days, will be the source of peace and prosperity for the nations. 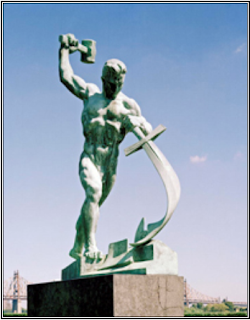 
Special Note:  Advent in Year A of the Revised Common Lectionary