Hosanna!
The Revised Common Lectionary splits the traditional Palm Sunday in two, one liturgy for the Palms and one for the Passion.  The idea is to get once-a-week church-goers involved in both the Palm Sunday triumphal entry and the profound depths of the Passion of the Christ (Good Friday).
For these Lectionary studies, however, I have stayed with the traditional structure, keeping this Sunday exclusively for the palm-waving entry into and saving the long Passion liturgy for Good Friday.  Not a perfect arrangement, but at least its closer to what the Gospels themselves do!  (Again, for the Passion, read the Lectionary studies for Good Friday.)

The Liturgy of the Palms in the Lectionary contains only two readings, the Psalm and the Gospel.  The two are hand in glove:  the Psalm excerpts are from an old liturgical drama in which the king enacts a salvation brought to anxious worshipers in the temple.  This destiny-making figure has survived great dangers by God’s help and his arrival at the temple gates signals that salvation for all has arrived.
The Gospel reading, the basics of which are common to all four Gospels, presents Jesus in his own time re-enacting that ancient liturgy, being acclaimed by his disciples and popular followers as was the ancient king by the worshipers in the procession and in the temple.
Psalm 118:1-2, 19-29.
The Psalm reading is the call to worship (verses 1-2) and the last half of the psalm that ends the Egyptian Hallel, the group of praise psalms (113-118) used at major festivals in Jerusalem.  In the Gospel stories of Jesus’ entry, this psalm is quoted by the people greeting the coming Jesus.  For those Gospel-hearers, Jesus is the royal speaker in the psalm.
Following the call to worship, the reading skips to the point at which the king is approaching the east gate into the temple.  In the following exchanges, the people (and priests) reply from inside the city.  The king speaks.
Open to me the gates of righteousness,
that I may enter through them
and give thanks to the Lord.
The gatekeepers reply.
This is the gate of the Lord;
[only] the righteous shall enter through it.
The king speaks his thanksgiving to God, showing that he is among the righteous.
I thank you [O Lord] that you have answered me
and have become my salvation.
The people inside declare the significance of this occasion, leading up to the prayer pronounced, “Hosanna!”
The stone that the builders rejected
has become the chief cornerstone.
This is the Lord’s doing;
it is marvelous in our eyes.
This is the day that the Lord has made;
let us rejoice and be glad in it.
Save us, we beseech you, O Lord [hōshī’ānnā]!
O Lord, we beseech you, give us success!
The answer to the people’s cry for deliverance is the king’s actual passage through the gates.  (These gates are in fact a large building, with a passageway over twenty-five feet long, with chambers opening off the insides; see Ezekiel 40:6-16.)
The passage through the gate leads into the outer court of the temple.  As the king passes through this entry, he is proclaimed by those who accompany him:
Blessed in the name of the Lord is he who enters! [my translation]
The priests and worshippers inside the temple respond, and go on to declare that this coming signifies that God’s light has shined on the people.
We bless you [plural; the king’s followers] from the house of the Lord.
The Lord is God [literally, “Yahweh is El”] ,
and he has given us light.
Bind the festival procession with branches,
up to the horns of the altar.
[The meaning of the Hebrew in this last verse is a little uncertain.]
The king figure has now reached the inner court of the sanctuary where the altar of animal sacrifice stood.  There he makes a final declaration of his thanksgiving for deliverance.
You are my God, and I will give thanks to you;
you are my God, I will extol you.
This thanksgiving concludes the liturgical action of the psalm, and the singer repeats the opening summons, calling on all to “Give thanks to the Lord, for he is good…”
Matthew 21:1-11.
The narrative of the triumphal entry in Matthew is presented in two parts, the preparation and the actual event.  The acclamations of the crowd interpret the event. 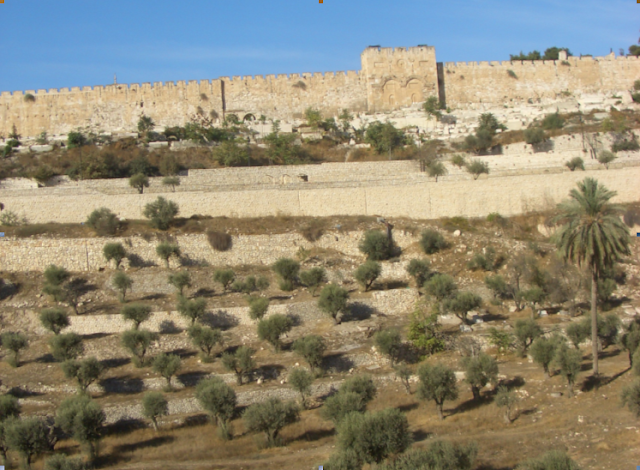 The East Gate of the temple area, as rebuilt in the 1530s by Suleiman the Magnificent.  (The Gate is sealed because in Ezekiel’s vision Yahweh had entered through it and ordered it permanently shut, Ezekiel 44:2.  Photo by Jay Wilcoxen.)


The geography of the event is quite clear.  Jesus mounts the animal(s) on the , which is to the east of , and rides down into the and up the steep hill to the east gate of the city – which leads into the temple.  Even if the first hearers of the present Gospel (probably living in Syria) were not familiar with the topography of Jerusalem (which had been destroyed by the time this Gospel was written), they were familiar with what was said about it in the Scriptures.
Some hearers would remember that the original “son of David” had ridden a mule when he was anointed king and made a triumphant entry into .
So the priest Zadok, the prophet Nathan, and Benaiah son of Jehoiada, and the Cherethites and the Pelethites [David’s personal body guards] went down and had Solomon ride on King David’s mule, and led him to Gihon [a spring in the Kidron Valley].  There the priest Zadok took the horn of oil from the tent and anointed Solomon.  Then they blew the trumpet, and all the people said, “Long live King Solomon!”  And all the people went up following him [out of the Kidron back into the city], playing on pipes and rejoicing with great joy, so that the earth quaked at their noise.  (I Kings -40, NRSV.)
In the Gospel Jesus sends two disciples to get a donkey and a colt (there are two animals only in Matthew), which they will find tied, as if waiting for them.  If bystanders ask about the disciples taking the animals, they are to say that “the Lord needs them.”  In the Gospel’s view, there are people out there ready to do the Lord’s bidding without question, without any explanations about secret plans, such as we might wish for.
A prophecy of the event.  Between Jesus’ instructions and the disciples’ carrying them out, Matthew makes a point of saying that this business with the donkeys is fulfillment of prophecy.  He quotes the prophecy in question, though his quotation is a bit odd.  The first clause – “Say to the Daughter of Zion” – either is not a quote, or it is a little fragment from .  The rest, “See, your king comes to you…” is from , except that it only quotes a fragment of the verse, and it does not follow either the Hebrew or the Greek texts (as these are known to modern scholars) in exact wording.  (Such text variations reinforce the view that oral recitation was the mode of transmission of such much-discussed texts.)
The point of the prophecy as presented, however, is that the prophets announced that Jerusalem’s king is coming to her, and he is coming in a humble manner, riding on a donkey, “and on a colt, the foal of a donkey” (verse 5).  (The “humble” note may have been ironic for some:  Solomon, the first “son of David,” rode on a simple mule – but he became the mightiest king!)
Two animals?  Someone in the milieu of Matthew’s Gospel thought it was important that two animals are (or seem to be) mentioned in the prophecy – the mother donkey and its colt, the little he-donkey.  Therefore, in Matthew’s story, and his story only, Jesus rides two donkeys in the triumphal procession.
The Christian scribe quoting the prophecy probably did not bother his head much about how to visualize that riding.  The scripture said two donkeys, and so there were two. (The movie version of Jesus Christ Superstar [1973 release] has a laughing and cheering Jesus standing up as he rides, with the camera angles such that the animals are not shown!  Can’t prove it either way by them!  Some later Greek manuscripts of Matthew change “they put their garments on them,” to “put their garments on it,” thus harmonizing the passage with Mark, which has only one animal.)
The event of the ride into the city is accompanied by the spreading of garments ahead of the donkeys, as if the red carpet were being rolled out.  The way is also adorned with tree branches (“palms” are mentioned only in ).  At the beginning we hear about “a very large crowd” (verse 8), but as things go forward, we hear of  “the crowds that went ahead of him and those that followed…” (verse 9).  It is a large popular demonstration, as Matthew presents it.
And these crowds are shouting the “Hosanna!” – the cry for salvation that is the climax of “the Egyptian Hallel” (Psalms 113-118; the Hosanna specifically in Psalm 118:25).
Except – as Matthew’s community retold the event, the crowds were shouting, “Hosanna to the Son of David!”  The psalm does not refer to David (by name), though all the other Gospels make clear, each in different words, that the Jesus who enters is a king (see ; ; and ).  This was a major point from which the Jesus confessors of Matthew’s time could begin their discussions with their Judean neighbors and relatives – that Jesus was the son of David and the hoped for Messiah.  The Matthew narrative proclaims this royalty publicly and joyously in this entry scene.
The paradox of Jesus’ kingly status has yet to be demonstrated, and will become clear only through the full course of the passion narrative.