Holy places are hidden from profane eyes, and people blessed by God’s Spirit live side by side with the unrighteous.

Genesis 28:10-19a.
The Torah reading presents Jacob’s dream – and his “ladder” – at .
Last Sunday’s reading showed Jacob outwitting his not very bright brother Esau, but now he has had to run away from Esau and his parental home to save his life.  That brings him to spend the night at a place that is secretly holy, a place later called , that is, beth-El, the “house” of the high-god El.
The .  The ancestor stories in Genesis not only established kinship lines and tribal friends and enemies in the greater Israelite world, they also identified and sanctioned holy places.  In the critical events of their wanderings the ancestors encountered awesome and numinous powers.  To name such powers and to mark them as sacred places was work that belonged to the ancestors.  Later generations did not discover new holy places; they were guided by those ancient encounters with the holy, and they revered and enhanced the great sanctuaries that the ancestors had discovered.
Jacob’s vision at is an archetypal example of a sanctuary legend.  In the dream Jacob sees a sullam, a word occurring only here in the Hebrew Bible.  Let’s dwell a little on this word that gave us “Jacob’s Ladder.”
The Greek translators used the word klimax, which means a scaling ladder (which was slanted toward the wall of the besieged city) or a stairway, and that Greek is probably the source, through Latin, of the English “ladder.”  For the Hebrew sullam, the older Brown-Driver-Briggs lexicon (1906) gave simply “ladder” as the meaning, but more recent Hebrew lexicons, with more comparative material from other Semitic languages, give the meaning “stepped ramp, flight of steps” (Koehler-Baumgartner, The Hebrew and Aramaic Lexicon of the Old Testament, Study Ed., tr. M.E.J. Richardson, Leiden:  Brill, 2001, Vol. 1, pp. 757-58.)  What the word probably meant in Israelite times was a staircase running from the ground up the side of a temple tower, perhaps to some landings part-way up, and then to the most holy sanctuary on the very top of the sacred mountain.  The model is the Mesopotamian ziggurat, which is also reflected in the plan for the “with its top in the heavens” (Genesis 11:4).
In Jacob’s dream the top of this staircase (“ladder”) reached to heaven – the most holy place at the top – and the messengers of the gods (“angel” means messenger in both Hebrew and Greek) went up and down this stairway carrying orders from the heavenly council to all parts of the land.  This was the vision in Jacob’s dream, that this very spot was secretly the place where the high god of heaven conducted business, where all the critical decisions for the human realm were made and set underway. 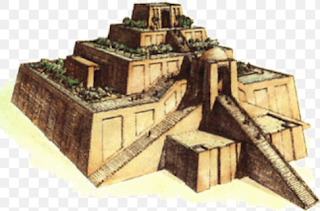