Oppressed hides a Moses, Peter confesses a Messiah, and Paul calls for a spiritual worship.

The texts for this Sunday present oppression and death in , but also a confessing church founded against the powers of death in   They present Moses saved and Peter empowered.  In the middle is the appeal to members of the Body to esteem their gifts appropriately.

The Torah reading is the beginning of the Exodus story and the birth of Moses.  While the narratives of the ancestors in Genesis were about individuals and their extended families, from this point on the object of the sacred story is the Bene Yisrael, the children of .  The ancestral families have become a great population—though hardly a “people” yet, since they have no order or covenant.

At the beginning of the story they are in trouble.  They have become enslaved and their owners treat them severely.  The narrative emphasizes the oppressiveness of the slavery.  “They set taskmasters over them to oppress them with forced labor… The Egyptians became ruthless in imposing tasks on the Israelites, and made their lives bitter with hard service in mortar and brick and in every kind of field labor” (verses 11-14, NRSV).

The Exodus story is a deliverance story, and the description of the oppression must make clear how desperately the deliverance was needed.  Hard labor as such is not what is oppressive; people work slavishly to make their own businesses succeed.  What is oppressive is the meaninglessness of forced labor that benefits only others who despise you.

This is introduced by the quaint story of the two midwives who were instructed by Pharaoh to kill every male child born to “Hebrew” mothers (-21).  This story is actually about a trick played on Pharaoh, not a realistic portrayal of a genocide attempt.  The two (!) women serving as midwives deceive Pharaoh—with tales that could obviously have been exposed—and then are rewarded by receiving families themselves among the Israelites (verses 20-21).

The last sentence of this episode, however, has the horror and dread of a real genocide policy.  “Then Pharaoh commanded all his people, ‘Every boy that is born to the Hebrews you shall throw into the , but you shall let every girl live.’” (verse 22).

The ultimate form of oppression is not simply to kill them (their labor is still useful), but to cut off any meaning for their future.  Meaningful life through either work or heirs is cut off.  That is the ultimate oppression. (The story is very insightful about human values!)

The command to kill all the Hebrew male children is the background to the Moses story.  He was born to a Levite woman, kept secretly for three months, then concealed in an “ark” (, the same Hebrew term as in Noah’s flood).  This ark (“papyrus basket” in the NRSV) was floated among the reeds by the bank of the river.  Pharaoh’s daughter discovers the crying baby, has compassion on it, hires its mother to nurse it, and makes Moses—to whom she gives this name—a member of the royal household of .  Thus, like Joseph (the son of Jacob), Moses was originally a mighty man in , which, however, he will plunder by taking away their slaves, whom he will make into a mighty people in their own right.

All these stories are told with a certain exultant tone, a delight in turning the tables on the ancient enemy.  The story never loses its deep seriousness, but the version we read had gone through many centuries of re-telling, during which it acquired some irony, some symbolic meanings, and some notes of sheer triumphalism.

The Psalm reading is an outburst of thanksgiving because the plots of the enemy against the Israelites were foiled!

—foiled, of course, because the Lord was on their side.

Whatever other allies the Israelites might have, it is only the Lord who really counts.  “If it had not been the Lord, who was on our side, … they would have swallowed us up alive…” (verses 1, 3, NRSV).

The genocide command in Exodus was to throw the male children into the river.  “…the flood would have swept us away, / the torrent would have gone over us” (verse 4).  may now exult.  “We have escaped like a bird / from the snare of the fowler; / the snare is broken, and we have escaped” (verse 7).

So over the centuries sang its thanksgiving for escaping Pharaoh – and many later oppressors history would bring upon them.

The Epistle reading continues in Paul’s letter to the Roman church, now moving from his reflections on ’s election to more practical matters about church life.

He has not been to yet, and thus he does not write about specific events of church life there, as he did in his letters to the church in .  Here are more general guidelines about conducting new life in the Christian faith.

His opening word is that the Christian life should be a constant presentation of each person as a living sacrifice to God.

The language deliberately echoes the sacrificial actions done at the altar in the temple.  Christians, like their Judean neighbors in , , and , rarely if ever presented actual animal sacrifices at the temple – and any other temple was strictly forbidden.  Yet long stretches of the Law of Moses were concerned with such sacrifices and were dominated by the centrality of the Tabernacle worship.  In place of actual animal sacrifice, Judeans and Christians were called to make their whole lives public testimonies to the truth and reality of their God, and thus present themselves as sacrifices for their “spiritual worship.”  (Note that verses 1-3 do not mention Jesus Christ.  They could be addressed to any Judean or “god-fearing” group.)

Though the oldest “churches” were only about twenty-five years old when Paul wrote this letter, his comments show that there was already diversity of functions—which he thinks he can assume in Rome as well as elsewhere.  He mentions prophesy, ministry, teaching, exhortation, generous giving, diligence in leadership, and cheerful mercy-doing (verses 7-8).

This may start out as a list of offices, but it turns into a list of actions by well-intentioned people.  Perhaps the lack of systematic listing is deliberate.  Paul may be resisting a tendency to endow “positions” or offices with stated dignities and well-defined boundaries.

Whatever the various functions, they should be carried out in the kind of mutual harmony and support seen in an organism, specifically in a living body.  People should think of themselves in their church service as members of the body of Christ, which also makes everyone “members one of another” (verse 5).

All these points support the opening exhortation.  “I say to everyone among you not to think of yourself more highly than you ought to think… each according to the measure of faith that God has assigned” (verse 4, NRSV).

With diversity of functions, there is a strong tendency for each to feel – and soon to expect others to recognize – the particular importance of their own function.  Why don’t they appreciate what I contribute?  Paul assumes that this tendency shows up as much in as in – or .  Its remedy must be to keep the “body of Christ” – a suffering and crucified body – ever before one’s awareness.

The Gospel reading is the pivot-point in Jesus’ Galilean ministry as presented by Mark and Matthew.

After much teaching and healing among the people, encounters with demonic powers who recognize Jesus, and other revelatory moments like Jesus’ baptism, the moment comes when the disciples themselves make a clear and emphatic declaration of who Jesus really is.  It happens in Peter’s words, “You are the Christ.”  After this declaration, Jesus begins to announce the trip to , his suffering death, and his resurrection.

Peter’s confession is the hinge between the labors of the unrecognized Messiah among the people in and the mission of the Suffering Servant in .

The passage is structured to contrast what people think about Jesus after his work in – that he is a powerful figure from the past, an Elijah, John the Baptist, or Jeremiah reappeared – and what the disciples now think about him.  “But who do YOU say that I am?” (verse 15, ).  The essential word of the answer is “the Christ” (Greek), “the Messiah” (Hebrew), both of which literally mean “the Anointed One.”  This much Matthew, Mark, and Luke have in common.

In Matthew, however, Peter’s confession is fuller:  “You are the Messiah, the son of the living God” (verse 16).

In Matthew’s church, this was how the decisive confession was made by Christians.  These Syrian Christians had come to believe that Jesus gave Peter direct sanctions for guiding the church, that the founding of “my church” was specifically related to Peter.  Thus, in Matthew the confession is followed by a long response from Jesus, addressed specifically to Peter.  (The “you” in “Who do you say I am?” is plural, addressed to the group of disciples.  The “you” in verses 17-19 is singular, to Peter only.)

The first part of this response concerns Peter’s name.  We should be aware that “Peter” was not a frequently-used name in either Greek, Aramaic, or Latin (Eugene Boring, in The New Interpreter’s Bible, Vol. VIII, p. 345).  Peter became a popular name only after the spread of Christianity.  Jesus calls the disciple by his correct name, “Blessed are you, Simon son of Jonah.”  But he also gives Simon a new name.  “You are Rock (petros), and on this rock I will build my church…” (verse 17).

The Peter who is the Rock of the Church is the Peter who confesses, “You are the Christ, the son of the living God.”  This declaration turns the assembly of followers into the church, and Peter is represented in the Gospels as the first to make this declaration.

Peter became famous as the chief apostle in the Christian churches of the :  (Galatians ), (Acts -25), Lydda and on the Sea (Acts ), (Galatians -14), (I Corinthians -12), and perhaps the churches in the northern Roman provinces of (I Peter 1:1).  (There is no reference in the New Testament to Peter in , unless “” in I Peter refers to .)

But there is more.  Not only is Simon Peter the foundation rock of the church, he is the keeper of its “keys,” meaning one authorized to “bind” and “loose” on earth with heavenly consequences (verse 19).  The reference to binding and loosing referred at the very least to the power to make decisions about established practices of the Christian life (later applied to the forgiveness of sins).  (The episode reported by Paul in Galatians 2:11-14 seems to indicate that Peter exercised that kind of power in the churches of around the year 49 CE.) 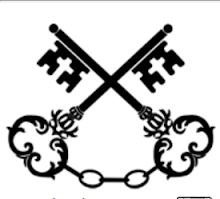 In any case, what began in the oral tradition of the Matthew churches (verses 17-19 of our passage) was to have a vastly expanded future, authorizing the powers of the Bishop of Rome (the Pope) over the Christian churches for many centuries.  Only in the days of Martin Luther and John Calvin was the Matthew text to be deprived of its papal aura, and to receive something of its older and original interpretation.