’s trials in the wilderness continue in this week’s Torah reading.

Last week it was food; this week it is water.  The people in the wilderness come to a camp site where there is no water available.  The people again accuse Moses, challenging the goodness of the exodus.  “Why did you bring us out of , to kill us and our children and livestock with thirst?” (verse 3, NRSV).  This time we hear Moses’ despairing appeal to God.  “What shall I do with this people?  They are almost ready to stone me” (verse 4).

Moses is told to bring several elders of the people as witnesses, to go to a great rock on , and to strike the rock with his staff to bring water for the people.  This is a dramatic scene, often depicted by artists.  The Lord’s action to sustain the people is clear and powerful. 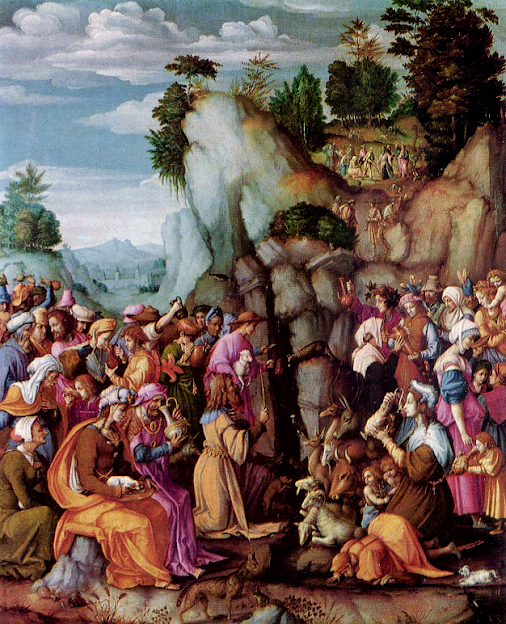 "Moses Striking the Rock...," Francesco Bachiacca, Florence, 1494-1557.
(The artist was more interested in the Renaissance dress of the people than in the actual Rock striking!)
Courtesy of Vanderbilt University Divinity Library.
The place is given symbolic names, Massah meaning Test, and Meribah meaning Quarrel (verse 7, NRSV with translators' footnotes).  The Israelites are to remember in the future the times when they did not trust the Lord, but put God to the test.
At the very end of the episode, the text shows what the most basic issue was whenever someone tested God.  They “tested the Lord, saying, ‘Is the Lord among us or not?’” (verse 7b).  Challenging the very basis of the enterprise, asking whether this entire business is really God’s doing, was the ultimate form of putting God to the test.  Here — and in future times as well (see and ) — to demand some proof of God’s presence was evidence of lack of faith, of unworthiness on the part of the chosen people.

The hardships of the wilderness were trying times for Israelites in both body and soul.

There is a significant feature of the “murmuring” episodes that says something important about the revelation at Sinai/Horeb:  When the Israelites murmur before Sinai they are scolded like pre-adolescent children, but nobody dies.  After Sinai when they complain against Moses and the exodus, somebody dies.  At Sinai/Horeb, something important has happened:  the people have become responsible for their conduct in a way they were not before.  received his bar Mitzvah (or bath Mitzvah) at Sinai; each Israelite became a “son” or “daughter” of the Commandment.

This Psalm reading recalls how God saved the Israelites in the wilderness through mighty works in the deep waters.  First God “divided the sea and let them pass through it” (verse 13), thereby saving them from too much water.  Then God “split rocks open in the wilderness, / and gave them drink abundantly as from the deep” (verse 15, ), thereby saving them from not enough water.

Our reading carefully separates (1) the wondrous deeds of benefit from (2) the complaining of the Israelites, though the complaining is not included in our reading here.  The complaint immediately follows the celebrating of the good deed (verses 17-20).  This whole psalm presents a balance between God’s great saving deeds and the disciplining actions of God, which are the responses to ’s complaints and lack of faith.  ’s past contained a mixture of salvation and discipline, and the psalm meditates on this mixture of good and evil as a “parable” and as “dark sayings” (verse 2).

But among the great things to be remembered with celebration was the time when God sent Moses to split the great rock giving water to the people.

The apostle Paul, in the Epistle reading, continues his exhortations to unity of purpose and humility of life.

The Greek of this passage tends toward eloquence at the expense of clarity.  “Encouragement in Christ,” “consolation from love,” “any compassion and sympathy” are phrases that take flight in high-sounding associations instead of concrete meanings (verse 1, NRSV).  Concrete meanings here are elusive.

Paul does produce one straightforward sentence, one that summarizes his appeal in the whole passage.  “Do nothing from selfish ambition or conceit, but in humility regard others as better than yourselves” (verse 3).  One heeds this summons to avoid selfish ambition by following the supreme model given in Christ.  “Let the same mind be in you that was in Christ Jesus…” (verse 5).

To elaborate this Christ-model, Paul uses the lofty and solemn words of a hymn that confesses and praises the redeeming work of Jesus the Christ.

Verses 6 through 11 are thought by Biblical scholars to contain such an early Christian hymn describing how the divine Christ emptied himself to become a slave, but was raised up and exalted by God over all oppressive powers in the universe.  The outcome, that “every tongue should confess that Jesus Christ is Lord,” is the reality in which Christians find a new unity and blessing.  They are to live united in their service to this Lord and ever subordinate themselves to his rule, and his rule only.  They carry out that service by imitating Christ’s self-emptying life.

Paul’s final summons to persist in that service is a profound challenge.  “Therefore, beloved, … work out your own salvation with fear and trembling; for it is God who is at work in you, enabling you both to will and to work for his good pleasure” (verses 12-13).  What an awesome summons from the apostle!

The Lectionary selects the Gospel readings for our current period from the climactic stage of Jesus’ mission, that time near the end when he is publicly presenting his message at the center of power in the Judean world.  The actions of this period are set not only in but in the temple.  (On all these Gospel readings until Advent, see the Special Note in last week’s Biblical Words.)

Jesus has just made his triumphant entry into — the event of Palm Sunday — which was a provocative act to the leadership, and now he is challenged by the various authorities and religious parties at the religious center.

In this Sunday’s reading, the question of the authority for Jesus’ action is raised but left unresolved.  No direct answer to the question is given in the public discourse.

The priests and elders put the question to him formally, but he answers them only conditionally.  If they will first answer a question he has for them, he will tell them by what authority he acts.  His question to them puts them on the spot, however, and they do not answer it.  Thus, Jesus also does not publicly answer the question of his authority.

The question Jesus puts to the priests and elders ties Jesus’ activity to that of John the Baptist.  “The baptism of John, what was its source?  Was it from heaven or from humans?” (verse 25, my literal translation).  For their own reasons — theological and political — the leaders will not publicly declare themselves on this question.  The implication is that Jesus’ authority is the same as John’s.  The reasoning of Jesus’ tactic is this:  If the leaders accept John’s authority, they must — for public purposes, at least — accept his.  Or if they deny Jesus’ authority they must also deny John’s authority.

Jesus uses this device to prevent his opponents from simply pigeon-holing him, from lining up current parties for or against him without attending to what he is saying.  His response tries to insure that his message will be listened to and responded to in its own terms.

Jesus continues the dialogue, in Matthew’s account, with a parable — or a test example.  It is a curious parable that, like the question about authority, does not deal in direct answers.

The underlying issue is still authority, or at least a claim to represent God’s will.  Jesus tells of a man with two sons.  He asks them both to go work in the vineyard.  One son says he will, but does not go.  The other son says he will not go work, but later changes his mind and does go and work.  Jesus’ question is, which one does the will of the father?  The difference is between talking the talk and walking the walk.  The son who does the work obviously does the will of the father.

Then Jesus applies the parable to the current situation by identifying the religious authorities as those who talk the talk.  They are expert at defining God’s righteousness, but they do not do it (an accusation repeated against the Pharisees in 23:2-3).  There are also others, Jesus says, who say “No” to God’s demand for righteousness.  These are, preeminently though not exclusively, the tax collectors and the prostitutes.  And as in the question about authority, John the Baptist is the test case for the issue.  “For John came to you [authorities] in the way of righteousness and you did not believe him, but the tax collectors and the prostitutes believed him; and even after you saw it, you did not change your minds and believe him” (verse 32, ).

The reality and power of these changed lives is the validation of Jesus’ authority.