Those who have waited for salvation welcome joyfully the coming king.

I have made it my practice to separate these two, to give only the Palm Sunday readings here and to save the full Passion narrative for a Good Friday set of readings.  The Good Friday readings have a separate Biblical Words listing.

The Liturgy of the Palms involves only two readings:  (1) the great Entry psalm, which reflects rituals led by the Davidic kings going back to the First Temple era in Jerusalem, and (2) the re-enactment by Jesus, in the Gospel narrative, of those ancient symbols at Herod’s temple around the year 30 CE.

The Psalm reading is the call to worship (verses 1-2) and the last half of the psalm that ends the Egyptian Hallel, the group of praise psalms (113-118) used at all the Judean festivals in .

In the rituals of the psalm, the people (and priests) inside the city respond to the royal procession coming to the eastern gate of the temple.  (All quotations are from the NRSV.)

Open to me the gates of righteousness,

that I may enter through them

This is the gate of the Lord;

[only] the righteous shall enter through it.

Having reached this gate, the goal of his earlier struggles (referred to in verses 10-14), the king speaks his thanksgiving to God, showing that he is among the righteous.

I thank you [singular] that you have answered me

and have become my salvation (verse 21).

The people declare the significance of this occasion.  (This may be the people inside, recognizing the king, or the people who accompany the king, who know the drama that has led up to this moment.)

The stone that the builders rejected

has become the chief cornerstone.

This is the Lord’s doing;

it is marvelous in our eyes.

This is the day that the Lord has made;

let us rejoice and be glad in it.

Save us, we beseech you [hōshī’ānnā], O Lord!

The answer to the people’s cry for deliverance (“Hosanna!”) is the king’s actual entrance.   (His entourage would pass through a thick city wall, with side chambers within the gate).

The gateway leads to the outer court of the temple (the only one accessible to non-Israelites).  As the king passes into this court, those who receive him joyfully declare,

Blessed in the name of the Lord is the one who comes! [NRSV margin]

We bless you [plural] from the house of the Lord.

And they continue in praise, directing the liturgical action toward the center of the temple.

The Lord is God [literally, “Yahweh is El.”]

and he has given us light.

[The precise action involved is uncertain.]

The king figure has now reached the inner court of the sanctuary where the altar of animal sacrifice stood.  There he makes a final declaration of his thanksgiving for deliverance.

You are my God, and I will give thanks to you;

you are my God, I will extol you.

That thanksgiving offering (which will provide feasting for the group, including the poor) concludes the liturgical action of the psalm, and the master of ceremonies repeats the opening summons, calling on all to “Give thanks to the Lord, for he is good…” 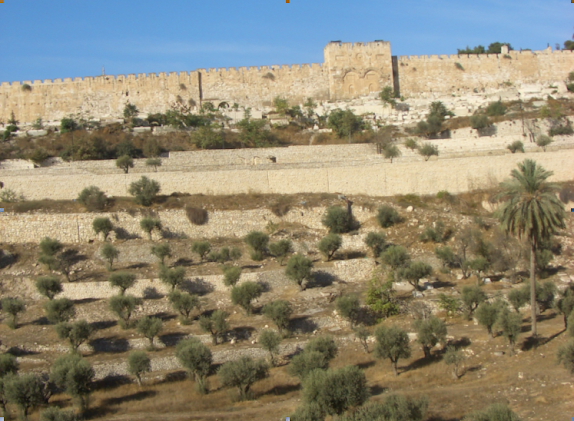 The site of the Procession into the East Gate of the city and temple.
The wall and gate were re-built by Suleiman the Magnificent in the 16th century CE.  The gate is blocked up because God told Ezekiel that in the new temple it must remain closed after God had returned through it (Ezek. 44:1-2).
(Photo by Jay Wilcoxen.)

The Gospel reading is Mark’s version of Jesus’ entry into .

The geography is made explicit:  is about two miles from the temple, Bethphage much closer, but both villages were on the eastern slopes of the .  Jesus comes to the temple from the east, coming over the mountain, down into the deep valley and up to the city/temple gate.

(In Ezekiel, God’s departure from the temple in judgment is through the east gate and over the , , and God’s return to the restored temple is the same route in reverse, .  These show the standard liturgical traditions of the first .)

Getting the Donkey.  A large part of Mark’s narrative is taken up with the details of how the donkey colt for Jesus’ ride is procured.  There is an element of secrecy, almost of conspiracy, here, but Mark does not bother to explain.  A similar mysterious procedure is followed to find the upper room for the Last Supper (-16), and some scholars think these passages (and the appearance of Joseph of Arimathea to bury Jesus) show that Jesus has previous connections and collaborators in .

Beyond that, the important points seem to be, (1) that this is a colt that has never been ridden, thus fitting for a king to ride in a coronation, and (2) that the explanation for taking the colt is that “the Lord needs it,” an unusual use of “the Lord” in Mark’s Gospel.  (However, in Aramaic, the same word means both “lord”—of a servant—and “owner” of an animal.)

The Entry.  The garments and branches are spread in the road by those around Jesus as a royal carpeting, a rather modest case of “preparing the way of the Lord.”  What the people shout is clearly from Psalm 118, though there is a variation from the phrasing of the Hebrew psalm:  In the psalm the “blessing” is in God’s name; in the Gospel the “coming” is in God’s name.  The Gospel version is much more applicable to Jesus as God’s Anointed One coming to .

The Davidic king.  The second part of the people’s acclamation has no direct connection with Psalm 118.  “Blessed is the coming kingdom of our ancestor David.”  The Gospel assumes a popular Messianic expectation by the crowds a few days before the festival.

In the larger context of Mark’s Gospel, this acclamation is ambiguous:  there is one sense in which Jesus fulfills the promises to David, but in so far as it expects a restoration of political and military independence for it is misleading.  This reflects yet another case in Mark of a misunderstanding of who Jesus is, or of the nature of the kingdom that he brings in.  The rest of the Passion narrative will make abundantly clear that this is a misunderstanding.

The ancient liturgy (Psalm 118) is carried further when Jesus completes the entry into the city by going into the temple.  There is no song of thanksgiving uttered here, but there is an inspection (he “looked around at everything”), and a return to for the night.  The purging of the temple from its abuses will take place on the next day, framed before and after by the episode of the cursing of the fruitless fig tree (Mark -24).

(The Gospels According to Matthew and Luke differ here from Mark, making the temple cleansing the climax of the triumphal entry, turning the whole action into a victory of prophetic reform.)

If the entry of Jesus into the city is read against the background of the whole of Psalm 118, there is an added depth to it.

The figure who enters in triumph is a redeemer figure, who in the psalm has already suffered for sins and is now delivered (Psalm 118:10-18).  In Mark, the suffering is anticipated and still lies ahead, as does the victorious deliverance from death – which in Mark is signified initially by an empty tomb.