The story of Jesus is retold as gospel (good news) by witnesses of his resurrection.

For joy and witness of the Easter season, the Lectionary turns to the Book of Acts for the testimony of the apostles.  This is instead of the testimony of Moses and the Prophets, the usual "First Readings" in the rest of the year.  In this season it is the great fulfillment that is acclaimed more than the great promise!

The first reading for Easter Sunday is the speech of Peter to non-Judeans, peoples of the nations, at the time when God revealed that they too could be baptized and included in the community of believers.

Peter’s speech on that occasion is itself a succinct statement of the whole gospel of Jesus Christ.

It begins, however, with a strong statement of the inclusiveness of the gospel message -- a new emphasis within the narrative line of Acts.  “God shows no partiality,” but accepts anyone in every nation who reverences God and acts accordingly (verse 35).  It is true that God’s message of peace in Jesus Christ was sent first to the people of (verse 36, referring to ) and all ’s prophets testify to the forgiveness of sins available through the Christ (verse 43), but the gospel message is now to be preached to all.

That gospel message includes specific historical events:  the baptism preached by John, the man Jesus of Nazareth with the power of the Holy Spirit, his healing works for those oppressed by evil powers, his confrontations with authorities in Judea, and his death “on a tree” in Jerusalem.  His disciples have been chosen by God to bear witness to these things.

But most of all, of course, they are to testify to his resurrection:  The climax of the gospel message is that “God raised him on the third day and allowed him to appear” (verse 40).

The risen Jesus was not seen indiscriminately by everyone, but only by those chosen by God as witnesses, those who also ate and drank with the risen Lord (verse 41).  The gospel message concludes with, or from another viewpoint begins with, the preaching of Jesus as the final judge of all peoples (verse 42).

Instead of a psalm, on Easter Sunday we hear an ecstatic passage from the prophecy of Isaiah.  This is one of the two or three passages in the entire Hebrew scriptures where a resurrection is foreseen.  (The others are and .)

Here, too, the universality of the message is proclaimed:  the Lord is preparing a “banquet” (New Jerusalem Bible) for all peoples. This holy celebration responds to the overcoming of death.  What has been the experience of all peoples, the “shroud” and “sheet” that is spread over everyone (death), is swallowed up.

The witnesses to Jesus’ resurrection must have understood themselves to stand where this prophecy points:

Lo, this is our God;

we have waited for him, so that he might save us.
This is the Lord for whom we have waited,
let us be glad and rejoice in his salvation.
(Isaiah 25:9, )

The reading from the Epistle is the earliest historical evidence in the New Testament for experiences of the risen Lord.

This passage was written around 54 CE by Paul, himself one of those who saw the risen Lord.  (The Gospel accounts of the appearances at the tomb and in the locked room were written between 80 and 100 CE.)  The passage further claims to present tradition received by Paul (verse 3), taking us back to only a few years after Jesus' death.

There are three individuals, with two of whom groups are associated.

(1) The Risen Jesus appeared to Cephas (Peter), with whom is associated “the twelve,” and then a group of more than five hundred ("most of whom are still alive" in 54 CE, verses 5-6).  The bit about the five hundred may refer to an early version of the Pentecost tradition.

(2) The risen Lord also appeared to James, Jesus’ brother, with whom is associated “all the apostles” (verse 7).  These are not the “twelve,” but people associated with James in the leadership of the church, including other members of Jesus’ family (see I Corinthians 9:5 and Acts ).

(3) Finally the Risen Jesus appeared to Paul, who says modestly that he was “the least of the apostles” because of his early persecution of the believers (verses 8-9).

Since he includes his own experience along with the others, Paul must think of the other experiences as similar to his own.  Even if we leave aside the three later descriptions in Acts of Paul's “conversion” experience (Acts 9:3-9; 22:6-11; 26:12-18), we must understand that Paul's experience of the risen Jesus was a visionary one, inaugurating the rich and complex life he knew “in Christ,” totally absorbing and transforming his whole being.  We have remarkable first person testimony to this epoch-making experience!

All reality became new for Paul, as a result of his experience of the risen Lord.  The experience Paul is talking about could not be recorded by a journalist or photographed.  It was a foundational experience transforming life.  So he understood the experiences of all the witnesses he cites, that the risen Jesus creates a new life in and through the believer.

The empty tomb belongs to the women, and especially to Mary Magdalene.  In Mark these women have stayed around, not only for the crucifixion and death but also to see his burial place (Mark -41, 47).  On the morning after the Sabbath, they continue their service by going to care for the corpse of the dead one.

They worry about moving the big stone from the tomb, but when they arrive the chamber has been mysteriously opened – allowing them to go inside!

The major event at the tomb is the women’s encounter with the “young man,” who lets them know what is going on – while the rest of us overhear this amazing news!  The message has several points:

(1)   Jesus of Nazareth, the crucified, has risen from the dead, and is gone.

(3)   Jesus is going ahead of the disciples to , where they will see him.

(4)   The women are to take this whole message to the disciples and Peter.

And what do the women do?

They too finally panic and flee the scene, as the disciples did two days before!  They flee, “for terror and amazement [the Greek words are tromos and ekstasis] had seized them” (verse 8).  They realize that a profoundly holy event has occurred. 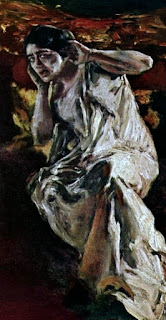 And with that, Mark's Gospel ends!

(Other endings, printed separately in modern translations, were provided by second-century readers who knew the other Gospels and felt compelled to supplement Mark’s abrupt ending with their better knowledge.)

Until the later twentieth century, commentators often thought that an original ending had been accidentally lost from a very early Mark manuscript – with no other copies surviving.  More recent interpreters, however, have come more and more to recognize that all that is needed to understand Jesus’ instructions for the future has been provided (14:27-28, reinforced by the “young man’s” message).

What the disciples (and the women!) must now do is go back to the beginning, return to , and go over the story of Jesus again!

The truest response to the Easter message is to retell the full gospel of Jesus the Messiah, risen Son of God!