The Spirit of God, that gives life, empowers communities with many voices to witness to God’s work.

These readings return to the usual pattern of a Hebrew-scriptures text with a psalm, followed by an Epistle and a Gospel.  The main text, this time, is not the Gospel but the reading in Acts about Pentecost.

When the day celebrates the work of the Spirit of God, this Prophetic reading may not be the first to come to mind from the Hebrew scriptures, but its power commands for it a mighty place among all the prophetic writings.

In current American culture far more people are likely to know the spiritual that sings “the knee-bone connected to the thigh-bone…” than will know the Biblical passage from which it comes.  The scriptures that have found a living place in the culture bear a powerful witness.

As is often the case with Ezekiel, God uses something that has gotten the prophet’s attention – especially something that annoys or angers him – to fashion a word of prophecy.  In this case, Ezekiel overhears the grumbling and cynical comments of his fellow exiles in :  “Our bones are dried up, and our hope is lost; we are cut off completely” (verse 11, ).

Ezekiel had a dual mission:  to condemn the over-confident sinners still in (most of the material in Ezekiel 4-24) but also to inspire some endurance and hope among the recent exiles in .  The hope is presented, however, in large general terms (in contrast to Jeremiah’s pragmatic advice to the same exiles in ):  the entire house of , now seemingly so utterly dead, can have a new and vigorous life.

Few visible objects evoke dead-and-gone as forcefully as dried bones lying in a dry valley.  The word of God to Ezekiel emphasizes the bleakness of these bones, in order then to visualize the astonishing restoration to life.

Bone by bone they reconnect, sinew materializes to string them together, flesh appears to empower them, and skin comes to protect the new body.  But bones, flesh, and skin are not yet a living being.  The essential requirement is spirit (translated “breath” by the in verses 6-10) – ruach.  Spirit is the vitalizing power.  It makes a body a living being.  In ’s case, for this prophecy, living ones will come back from the dead.

An slaughtered and consumed as carrion, leaving bones to litter the landscape, will live again.  That is the power of God’s Spirit – when its time for action comes.

The Psalm selection reiterates this vital power that the spirit bestows on living creatures.

The psalm as a whole is one of the more impressive hymns to God’s wisdom and blessing as shown in the created world.  Following a section praising the harmony of the vegetative and animal world (verses 14-23), this concluding section praises the wonder of things in the sea, and then generalizes about the dependency of all creatures on God’s support.

When you hide your face, they are dismayed; when you take away their breath [ruach, wind/spirit], they die and return to their dust.  When you send forth your spirit [ruach], they are created [the verb of ]; and you renew the face of the ground (verses 29-30, NRSV).

The Spirit of God creates the spirit of living creatures – and, notably, also renews the face of the ground.  The whole environment is refreshed by the Spirit of God.

The reading from Acts is the primary text for the Day of Pentecost.  What was prepared for in the Lectionary texts about the risen Jesus over the last few weeks finally takes place here, and the spirit-empowered community of witnesses is launched on its mission.

The setting of the Pentecost event emphasizes two things:  that all the disciples and believers were together in one place, and that in at that time there were Judean people “from every nation under heaven.”

The witness to the resurrection and saving power of Jesus starts from a single unified group.  This is an essential point for the presentation in Acts, even though it is not historically likely.  It was important to the second generation of Christians to identify a single form of the gospel message that would not differ significantly as it spread to the communities of , , and finally .  The very gospel now preached and believed in and had started in on Pentecost.

The unity of the gospel message is balanced by the diversity of the people hearing it on Pentecost.  The list of regions from which the hearers at Pentecost came (verses 8-11) represents the extremes of the familiar world from to and from the to .  The religious significance of this diversity is in the phrase “from every nation” (verse 5).  The prophets saw ’s coming glory and restoration as a blessing to the nations, and these Judeans represented those nations present at the holy place when God’s final truth breaks in. 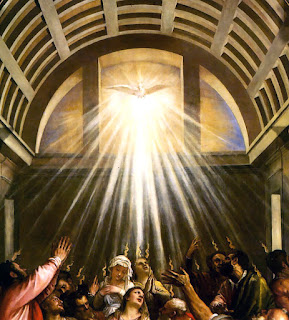 The striking aspect of Pentecost, as presented here, is the language miracle.  The disciples are empowered by the Holy Spirit with “tongues as of fire,” symbolizing the capacity to speak different languages.  All the diverse Judean peoples can hear the gospel spoken in their own local languages.  The actual phenomenon of “speaking in tongues,” which does not involve foreign languages, is less important here than that this gift of the Spirit is the reversal of the .

The story of the in describes Promethean days when gods and humans shared the earth and humans were capable of nearly anything – because they spoke a common language and could achieve a common mind.  Consequently, they became a threat to the gods by starting to build a city up to heaven.  To foil this human scheme, the gods cursed humans with the diversity of their languages; they could no longer cooperate and unify their efforts.

The disciples at Pentecost do not eliminate the diversity of human languages, but through the Spirit they overcome it by speaking the same truth in all languages.  When the days of prophecy come and the Holy Spirit is poured out, the blessing of human harmony and cooperation can be restored.

When Peter stands up to interpret for the people what has happened, he quotes the prophecy from Joel about the prophesying in the last days.  It is a powerful passage, with awe-inspiring hope for a new age.  It expresses marvelously the zeal that must have fired this movement, which was so truly charismatic – from the Spirit – in its early years.

The Gospel reading does not have the drama of the Pentecost narrative in Acts, but it is the Johannine anticipation of the outpouring of the Spirit.  The terminology is different.  In John we hear Jesus say to the disciples, “When the Advocate comes, whom I will send to you from the Father, the Spirit of truth…” (, ).

The first “truth” the Spirit will guide the disciples into is their witness to Jesus.  “You too will be witnesses, because you have been with me from the beginning” (, New Jerusalem Bible).  This divine power will replace the presence of Jesus for the disciples and become the source of their witnessing to knowledge of God brought through Jesus.

There is yet more for the disciples to grasp of the meaning of Jesus’ coming.  The role of the Spirit is to guide them to it, or to infuse them with it.  “I did not tell you this from the beginning, because I was with you; but now I am going to the one who sent me” (16:4, ) – and you will need the help of an Advocate to carry on.

The emphasis here is on continued teaching that the disciples will need.  Still speaking between the Last Supper and his arrest, Jesus says, “I still have many things to say to you, but you cannot bear them now.  When the Spirit of truth comes, he will guide you into all the truth” (-13).  They could not absorb during Jesus’ time all that they will need to carry on their mission in the world.

While John’s Gospel does not speak about the “church,” the common life of the believers (koinonia), guided by the Advocate, bears witness to Jesus’ name and power to the unbelieving world around it.