In , ancient prophecies and songs of victory are given to those

who wait for God’s deliverance.

The prophet Micah was a country cousin of Isaiah of Jerusalem.  Isaiah was the city spokesman, close to the royal family, prominent in a time when the was still a regional power.

Micah was from the small town of , about twenty-five miles off to the southwest from the great city.  (Twenty-five miles was a long day’s hike over rocky trails.)  While Micah has less sympathy with Jerusalem/Zion’s possible fate (he predicts its complete obliteration in ), he still shares with Isaiah the language and tradition of the renowned mother city where David ruled.

That tradition looked back to the reign of God over the nations through God’s Anointed servant.  David himself came from a small town of , and neither that little town nor other clans of forgot that David’s roots were among them.  (The book of Ruth further enhanced the lore of in later generations.)

Both Micah and Isaiah lived through times of impending doom from invading Assyrian armies, with the resulting subjection of the .  From that time on, either in Micah’s own time or later, prophetic circles sought signs of a coming change of fortunes.

Our passage anticipates such a new age.  Out of the little town of will come (again) a ruler in .  (The word is mōshēl rather than melek, king.)  This ruler will be the good shepherd of the people, and they will dwell in security (verse 4).

Later generations would have heard additional prophecies in the passage.

Therefore he shall give them up until the time

when she who is in labor has brought forth;
then the rest of his kindred shall return
to the people of (verse 3, ).

A long period during which God has “given up” the people to subjection and scattering is foreseen.  In the times of Herod, Pilate, or Nero, this long period can be seen as coming to an end; a new ruler will reunite the faithful of God, however dispersed they may be, and become for them a prince of peace.

The psalm reading is the Magnificat in Luke’s Gospel.  Like the Micah passage, it looks back on a period of subjection and misery endured by God’s city and people.  But that has now ended and the speaker of this victory song exults in the great reversal that the “Mighty One” has brought about.

The song in Mary’s mouth makes her directly parallel to Hannah, the mother of Samuel, in the older scripture.  Mary’s song is a modified version of Hannah’s song (I Samuel 2:1-10), with the same emphasis on the mighty being brought low, the rich sent away empty, the lowly lifted up, and the hungry fed.

There is no reference in Mary’s song to the barrenness of one soon to be a mother, but when it says, “he has looked with favor on the lowliness of his servant,” “servant” is feminine; he has looked upon his “handmaiden.”

The Gospel is saying that Mary’s experience, like Hannah’s, anticipates the beginning of a new age:  in Hannah’s time the rise of King David, taking to heights of prosperity and magnificence – to be followed by Solomon, “the one of peace.”  In this perspective, John the Baptist, the voice of a prophet after a long period of no divine words, is like Samuel (Hannah’s son), the forerunner and anointer of David, the Anointed One (Messiah) par excellence.

The Epistle reading looks more toward the meaning than the events of Advent.  Its particular emphasis is on the incarnation:

Sacrifices and offerings you have not desired,

This is a quotation from Psalm 40:6, except that the statement about the “body” is different from both the received Hebrew and Septuagint texts.

The Epistle to the Hebrews is focused on the body of Christ as the sacrifice for sin, a sacrifice made once for all on behalf of all who accept Jesus as Lord.  This body entered living history and was given up – entirely in accordance with the will of God – and that body now replaces the animal sacrifices of old times.

For those devoted to the old rituals of the Tabernacle and the , this is the astonishing and revolutionary good news of Advent.

The Gospel reading is the visit of Mary, who has just heard the announcement from Gabriel, to her relative in .  The passage is ’s glorification of God's action in the Advent announcement.

We have just heard the announcement to Mary of the conception; now we hear what it means. 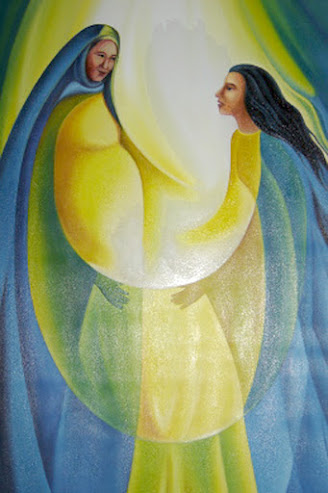 Elizabeth, mother of John the Baptist.  Elizabeth’s husband Zechariah got lots of stage play in the first part of the chapter, Mary has a large part in the events still ahead, but here Elizabeth, inspired by the Holy Spirit, speaks her piece.  (A few early Latin manuscripts even say sang the Magnificat instead of Mary.)

These events are so portentous that the babies in the wombs are rejoicing by anticipation.  , feeling the infant kick, cries out, with all the ages, “Blessed are you among women, and blessed is the fruit of your womb” (verse 42, ).  She goes on raving about – not her own baby, but – Mary’s barely conceived baby.  “Why has this happened to me, that the mother of my Lord comes to me?”

Who is unworthy old me, that the Anointed One visits me?  (She is not the last older woman to speak this way in Luke’s Gospel.)

’s final word takes on a larger perspective.  “Blessed is she who believed that there would be a fulfillment of what was spoken to her by the Lord” (verse 45).  All the women of faith down through the Israelite ages are encompassed here – Sarah, Rebecca, Rachel, Tamar, Samson’s mother, and Hannah.

But supremely, the one who has waited for the fulfillment is Mother Zion, the city of given its first glory by David, the shepherd from .