Ecstatic news of God’s new work leads to a vacant tomb – and retelling the gospel story.

The voice of scripture for Easter Sunday is mostly ecstatic.

It is elevated speech, lifted beyond all usual limits in the jumping-up-and-down joy of a vastly astonishing message.  All, that is, except the Gospel, which is a simpler story of surprised women and perplexed, doubtful disciples.

(The alternate reading is chosen here; the main reading is the Acts 10 passage, used for the Epistle reading below.)

It begins with God’s naming with delight the new creation:

…For look, I am creating to be ‘Joy’
and my people to be ‘Gladness.’
I shall be joyful in
and I shall rejoice in my people.
(verses 18-19, New Jerusalem Bible Version)

Sharing in God’s joy, the fortunate faithful will find that the world has been restored to paradise.  Infant mortality will disappear and all will live to enjoy a blessed seniority, with life expectancy well over a hundred years (verse 20).

It will not be a world without work and constructive activity, but what is built will remain and be useful, what is planted will grow and be fully productive.  No invaders will seize the goods and produce, no impersonal agencies will foreclose or repossess.  “…For the days of my people will be like the days of a tree, / and my chosen ones will themselves use what they have made” (verse 22, V)

The comparison of human life with a tree is very favorable, for a tree can grow again from a stump.  So the sages understood it:

There is always hope for a tree:
when felled, it can start its life again;
its shoots continue to sprout….
Its roots may have grown old in the earth,
its stump rotting in the ground,
but let it scent of water, and it buds,
and puts out branches like a plant newly set.
(Job 14:7-9; V)

The coming conditions of paradise will include blessings for future generations (verse 23), and even the animal world will become peaceful and no longer carnivorous – except for that wicked serpent who disrupted the first paradise; his diet will be dust (verse 25).

Repeating words of an earlier prophecy of paradise, the vision here concludes in peace:  “They shall not hurt or destroy on all my holy mountain, says the Lord” (65:25b, , quoting ).

The Psalm reading repeats the victorious outcome of the battle against surrounding foes, the battle and victory presented in the psalm read on Palm Sunday.  That psalm had reflected the drama of salvation as consisting of desperate and mortal struggle, waged in the (the valley of the shadow of death, Jesus’ , verses 10-13).  It culminated with the triumphant entry and welcome for the victor at the sanctuary of the Lord, who was the doer of these glorious deeds (verse 24).

In the ecstasy of the Easter proclamation, the triumphal entry is no longer simply a procession into the waiting but hostile Jerusalem (as it was on Palm Sunday); it is the elevation of the Suffering Servant to a greater center of power from which he will reign over all things (the rejected stone has become the chief corner, verse 22).

The decisive Easter message from the psalm is spoken by the delivered royal servant, “I shall not die, but I shall live…” (verse 17).

Easter Sunday’s Epistle reading is the speech of Peter to the household of the Roman Centurion Cornelius.

As the book of Acts presents it, this was the time that non-Judeans, peoples of the nations, were, by God's revelation, first baptized and included in the community of believers.  Addressed to such people, the speech is itself a succinct statement of the whole gospel of Jesus Christ.

It begins, however, with a strong statement of the inclusiveness of the gospel message – a  new emphasis at this point in the development of Acts.

"God shows no partiality," but accepts anyone in whatever nation who reverences God and acts accordingly (verse 35, ).  It is true that God's message of peace in Jesus Christ was sent first to the people of (verse 36, referring to ) and it is 's prophets who testify to the forgiveness of sins available through the Christ (verse 43), but the gospel message is now to be preached to all people.

That gospel message includes specific historical data:  the baptism preached by John the Baptist, the man Jesus of Nazareth with the power of the Holy Spirit, his healing works for those oppressed by the devil, his confrontations with authorities in Judea, and his death "on a tree" in Jerusalem.  His disciples have been chosen by God to bear witness to these things. But most of all, of course, they are to testify to his resurrection:  "God raised him on the third day and allowed him to appear" (verse 40).

The Risen Jesus was not seen indiscriminately by everyone.   He was seen only by those chosen by God as witnesses, those who also ate and drank with the risen Lord (verse 41). The gospel message concludes with, or from another viewpoint begins with, the preaching of Jesus as the final judge of all peoples (verse 42).

The Gospel reading gives us a more earthy presentation of the Easter message.  (Only by comparison with the preceding texts, of course.  This is still a pretty exotic piece of scripture!)

The women have remained faithful to Jesus, even when male disciples have betrayed, denied, and generally disappeared.  It is a mournful business they are left with, seeing to the proper embalming of the body.  Their distress is protracted even further because the crucifixion happened just before a Sabbath, and they have to delay their ministries for an extra twenty-four hours – presumably an agonizing wait for them.

Arrived at the tomb, things are not in order.  The tomb is open, and the body is missing!  More woe for these grieving servants. 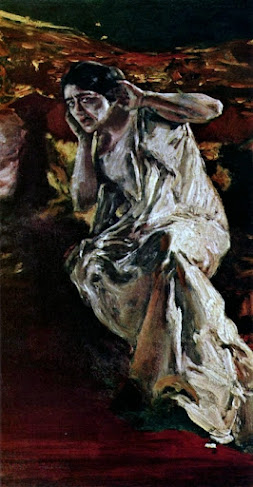 But now the text gets exotic.  Two wonderfully dressed gentlemen, clearly not of this world, present themselves to the women who drop to the ground in terror.

These men bring the message of the new age – only it is approached in a round-about way.  “Why do you look for the living among the dead?” (verse 5, ).  And if this mystifies the women, the men remind them of what they should have remembered, that Jesus told them well ahead of time that “the Son of Man must be handed over to sinners, and be crucified, and on the third day rise again” (verse 7).  Being reminded of this (which obviously was not taken seriously until the hard fact of the empty tomb certified it), they hastened off to tell any disciples they could find.

Only now does the Gospel writer feel that we need to know who these women were.  (Unlike Mark, he does not name them back at the crucifixion or at the beginning of the tomb story.)

Two of the women have been mentioned before in this Gospel, at 8:2-3.  Mary the Magdalene (that is, Mary from Magdala, a fishing village in ) had had seven demons exorcised from her by Jesus, and Joanna was the wife of an official in the court of Herod Antipas, ruler of .  The earlier reference indicates that these, with other women of some means, supported Jesus and the disciples in the period.  If they were present at the tomb it was because they had come to the Passover with Jesus and persisted in their support to the end.

Also mentioned by name is another Mary, the mother of one of the disciples named James, almost certainly not James bar Zebedee, but a younger or “lesser” James.  Several mothers of Jesus’ gang members may have come to Jerusalem with them, but only the names of these (and Salome in Mark’s tomb story) have come down to us.

The report of the women to the disciples was not a big success.  “These words seemed to them an idle tale, and they did not believe them” (verse 11).  The journey from empty tomb to belief by the disciples is a prolonged one in Luke.  Some text witnesses mention that Peter ran across town (since he would have been staying in , probably) and checked out the tomb story.  The tomb was indeed empty and the linen cloths were in place, but he went home only confused about it all (verse 12).

In time the women’s report will be vindicated by other people’s experiences, but we do not hear about any apologies to the women later!

In time they will all shout, Hallelujah!  The Lord is risen indeed!