God’s promise to David sends a mystery into the world—which could become very intimate and personal.

The final Sunday in Advent emphasizes the Coming One as a descendant of David, heir to the promises of the Lord that such a descendant would deliver Israel and be their faithful shepherd (see ).

This prophetic reading is the prose version of the promise that David will have a perpetual dynasty.  (The main poetic version of this promise is found in Psalm 89:19-37.)

At ease in his newly-occupied capital (the old city-state of Jerusalem) to which he has just brought the Ark of the Lord (II Samuel 6), David proposes to build in that city a “house of cedar,” that is, a temple residence, for the Lord.

Through the prophet Nathan, God tells David he has things backward; he will not build God a “house,” God will build him (David) a “house.”  For the moment, says Nathan, God wants not a temple, but a dynasty.  (The temple will come through the son of David, as indicated in the omitted portion of our reading, verses 12-13.)

City, King, and .  As the old Israelite tradition has it, none of these was a part of the original guidance for given by Moses.  (The one exception is that the “Tabernacle” became the pattern for the post-exilic .)  David comes into Israelite history as the shaper of a new order for in the world.  In that new order, will be the dominant power among the surrounding nations, its holy city will be world-renowned, and the blessings of peace will flow from it to all (as in Isaiah 2:2-4).

This “reaching beyond” ’s tribal world implants an unceasing tension in ’s heritage.

This tension is between the elect exclusiveness and the royal inclusiveness.  It tends to pit the intimacy of tribal identity against the sovereignty of imperial rule.  It tends to cast the self-sufficiency of tribal fraternity against the shepherding care-of-all by a divinely supported lord.  Ultimately, this tension is between kinship loyalty and the claims of citizenship.

This new order, the Davidic heritage, is not for the moment only, but for all time.  Our selection concludes, “Your [David’s] house and your kingdom shall be made sure forever before me; your throne shall be established forever” (verse 16, ).

Later generations were sure that in some way or another God would keep that promise.  They were sure that, though no native king might, for the time being, be visible ruling a humbled and oppressed or , nevertheless in some secret way a son of David is still in the divine agenda.  In God’s own time that promise – and the Davidic heir – would eventually emerge in some unexpected way, vindicating God’s promise.

On the Sunday before Christmas, a psalm of David is replaced by the Magnificat of Mary, a hymnic celebration of God’s acting in favor of God’s maid servant and the lowly and hungry who have waited for the Lord.

There is a small minority of early Latin manuscripts of the New Testament that make this the Song of Elizabeth (John the Baptist’s mother) rather than Mary’s Song.  But whether Mary or Elizabeth, the feminine voice in the hymn is ’s.  It is the voice of the city who was unfaithful to God but has served her time and has now been proclaimed as restored to beauty and motherhood.  The sacred world of the mother-city (metropolis, mater-polis), seen also in Athena, the goddess of , lived on in the poetry (and at one time in the rituals) about as the mother of her population and of her anointed one.

Mary’s Song, in the voice of , speaks first of the grace given to her, for which the generations will bless her.  God “has looked with favor on the lowliness of his [maid] servant”; God “has done great things for me” (verses 48, 49).  God has shown favor to the espoused one, a favor that signals a change in the ways of the world.

The Song then turns to the status revolution that this favorable action creates for the world at large.  By showing favor to God’s wife/city, to the woman who will give birth to God’s Son,

[God] has brought down the powerful from their thrones,

and lifted up the lowly;
[God] has filled the hungry with good things,
and sent the rich away empty (verses 52-53, ).

All of this comforting of the restored mother and reversal of fortunes of the rich and the poor—through all of this God has “helped [God’s] servant , in remembrance of [God’s] mercy” (verse 54), which “mercy” includes God’s promises to David.

Restoring the City, giving birth to the royal Son—all is done for , though beneficial consequences will also flow over to many nations.

The Epistle selection is at first sight surprising for this Sunday in Advent.  It is a benediction!  The key to its selection for this day lies in the language used about the proclamation of Jesus Christ:  “…according to the revelation of the mystery that was kept secret for long ages, but is now disclosed…”

Advent is about the secret working of God.  Behind the scenes, through the ages, moves God’s own intention, bringing it about in ways utterly unfathomable to self-occupied people.  The announcement of the good news is definitely NEWS—unfamiliar, unexpected, improbable.  It is the revelation of what was unknown, secret, a “mystery.”

The corollary of this view of the proclamation of Jesus is that only those “in the know” can realize what is really happening:  heavenly messengers (angels), who may give a “sneak preview” to a bunch of working shepherds, faithful elder folks who have anticipated these events all their lives (see ), learned men informed by the wisdom of the ages to look for this special moment (Matt. 2:1-12).

Paul blesses the God who has revealed in Jesus Christ the mystery of how the promises of the past are being fulfilled now.

The Gospel selection presents that excruciatingly private and intimate moment of the young girl Mary’s life when she was spoken to by the messenger Gabriel.

A Little Aside about Gabriel.  Gabriel appears in history as one of the chief heavenly messengers (“angels”) during the Persian period (roughly 550 to 300 ).  He appears by name in and (and without name in 10:5-11).  In those places he is an interpreter of visions of the future given to the wise dream-interpreter Daniel. 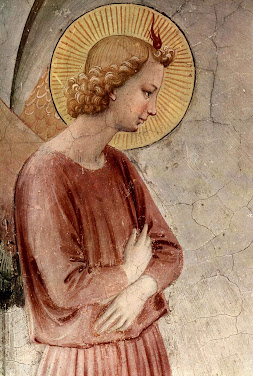 Gabriel, section from The Annunciation by Fra Angelico, Florence, 1415.
Courtesy of Vanderbilt University Divinity School Library.
Gabriel’s co-worker Michael also appears in  and 12:1, where he is the warrior leader staving off the onslaught of the forces of evil.  (Michael also appears in the New Testament in  and .)

A full portfolio of the top four heavenly commanders (“angels”) is given in I Enoch 40:8-10 (from around the 1st century ).

And after that, I asked the angel of peace, who was going with me and showed me everything that was hidden, “Who are these four faces which I have seen and whose voices I have heard and written down?”  And he said to me, “The first one is the merciful and forbearing Michael; the second one, who is set over all disease and every wound of the children of the people, is Raphael [in Hebrew the name means “El heals”]; the third, who is set over all exercise of strength, is Gabriel [the name means “El is a strong-man”]; and the fourth, who is set over all actions of repentance unto the hope of those who would inherit eternal life, is Phanuel [“face of El”] by name.

Back to Mary.  Of all things secret, this interview between the messenger Gabriel and the virgin Mary has to about top the list.

Only Luke and Matthew tell anything about Jesus’ birth and his virgin mother.  In Matthew’s version of the virginal conception, Mary’s side of the experience is totally absent.  The event is related exclusively from Joseph’s viewpoint.  His experience is of a near-scandal that must be kept as secret as possible.  The virginal conception is exclusively a divine secret, a mystery, at the direct instructions of the (nameless) heavenly messenger in Joseph’s dream (Matthew -25).

The story of Gabriel and Mary was written about eight decades after Jesus’ birth, yet it is a touching and personal account of the secret divine action at work.

There is emphasis on the fact that Mary is a virgin and will bear a child, but there is no direct reference to the prophecy in Isaiah of such a birth.  Here the virginal conception is simply a miracle, similar to those that accompanied the births of other destiny-makers in ancient and the Greek world.

Judean ethos took great pride in fatherhood and the succession of the male generations, but one parent had to yield to the divine source—and better the father than the mother!  (In , the favorite type of miraculous birth story was infertile women becoming pregnant, and in Greek lore it was common for a male god to impregnate a human female.)

In Mary’s case, Gabriel declares that, “The Holy Spirit will come over you and the power of the Most High will overshadow you…” (verse 35, CEB).  The Holy Spirit is the impregnator rather than a human father.

When Gabriel talks about the Destiny of this miraculously born child, the emphasis is on the descent from David.  “The Lord God will give to him the throne of David his father.  He will reign over Jacob’s house forever, and there will be no end to his kingdom” (verses 32-33).  God’s past reign over through the house of David will take place again, after many centuries of apparent defeat and abandonment.

Whatever God’s future work through Jesus would bring, this tender story presents Mary as the stand-in for the mother-city —and for the coming church.  Down through the ages the faithful of God’s church would echo her modest response to Gabriel:   “I am the Lord’s servant.  Let it be with me just as you have said” (verse 38, CEB).