An ecstatic declaration rings out about a Messiah — to oppressed people and to working shepherds.

The readings for Christmas Day are all ecstatic declarations.  Something awesomely good has happened, and humble people, nations, and all beings high and low are invited to rejoice in it.

The prophetic reading concerns people sunk in gloom and oppression, people who currently know the “yoke” and the “rod” of their oppressor, people who have often seen the “boots of the tramping warriors” and the “garments rolled in blood” (verse 5, ).  They are called people who walk in darkness, who live in a land of deep darkness.

In the time of Isaiah ben Amoz (active, 740-700 ), the people referred to were the people of the former northern kingdom of Israel, people who had been conquered and occupied two or three decades before by the mighty kings of Assyria (733 , first exile of the northern kingdom).  The people who remained in those northern regions now lived as subject peoples in Assyrian provinces created out of their old home territory.

However, something has now happened, something that makes the prophet believe that there is extremely good news for those subject peoples.  The age of the great king David is about to return, the reign of the God of David is dawning again for the subject peoples living in darkness.

The signal that a great change is happening is a birth.  “For a child has been born for us, a son given to us” (verse 6; Hebrew verse 5).  A birth — a mere birth!  How can a birth of a child, no matter how high on the status scale, signify such a revolutionary turn as this passage envisions?

Again, in the time of Isaiah ben Amoz we are probably not talking about a literal nativity.  More likely is the kind of birth pronounced in the messianic psalm:  “I will tell of the decree of the Lord:  He said to me, ‘You are my son; today I have begotten you’” (Psalm 2:7).

The speaker of this part of the psalm is the newly enthroned king, whom God has “today” adopted, “begotten” as son to reign over the rebellious nations who oppose God and his Anointed (Psalm 2:2).  The “birth” proclaimed in the Isaiah good news is the establishment of a new regime, for which great expectations are raised high among the hopeful people.

There is a new king in .  A divine decision has been made to put an end to the oppression of the peoples (of the old northern kingdom), to establish justice and peace in place of slavery and war.  Because of this new king, there is an ecstatic declaration of new light for people who have been trapped in darkness.

Under this new king, the oppression will be ended, the debris of war will be disposed of, and there will be the beginning of a true reign of peace (verses 4-5).  This king will have some wonderful names pronounced in his honor, including “Prince of Peace” (verse 6).  In his reign “there shall be endless peace” and the throne of David will be established “with justice and with righteousness / from this time onward and forevermore” (verse 7).

It came from Isaiah’s time, but it has become a vision and an ecstatic hope for the ages.

The ecstatic declaration in the Psalm reading is a “new song.”

This is perhaps the most emphatic of the “Enthronement of the Lord” psalms, those psalms that celebrate Yahweh as King of all creation and source of all stability and justice (Psalms 47, 93, 95-99).  Its punch line as an enthronement psalm is verse 10:  “Say among the nations, ‘The Lord is king!’” perhaps better rendered “The Lord has become king!”  It is an event.  Something has happened (at the very least in the liturgy).

The declaration of the Lord’s kingship always has as its corollary a judgment.  “The world is firmly established, …[therefore] he will judge the peoples with equity” (verse 10).  The kingship of the Lord is good news to the oppressed, the victims of injustice, but it is bad news to the oppressors, to the arrogant and those ruled by greed.

The Lord, who has now appeared, is on the side of the needy and downtrodden.  For them, the ecstatic declaration at Christmas is good news.

The ecstatic declaration in the Epistle reading is the opening.  “For the grace of God has appeared, bringing salvation to all!” (verse 11, NRSV).

The great event declared as good news always involves change.  Here the change emphasized is not in the outward conditions but in how the saved ones live.  The emphasis is on the consequences of the saving event as they should be developed in the lives of those who have been saved.

These consequences include a “training” in an orderly manner of life, and living with a hope for a greater glory to come.  The climax of the great event is that Jesus Christ has prepared a people of his own, a people who are “eager to do what is good” (verse 14, translation, avoiding ’s “zealous”).

The final consequence of God’s great act:  a people eager to do what is good!

In the Gospel reading the ecstatic declaration is by the heavenly messengers (“angels”).  That, however, is the climax of the story.

The narrative begins with an imperial setting.

“In those days Caesar Augustus declared that everyone throughout the empire should be enrolled in the tax lists.” (verse 1, CEB [Common English Bible]).  The writer of the Gospel has overstated the case a bit.  It may have seemed to the local people that all the world was involved in the census, but in reality the census in question only involved and .

The Census.  Archelaus, the son of Herod the Great, had ruled and for ten years after Herod the Great’s death (from 4 to 6 CE).  However, Archelaus was such a tyrant and foolish administrator that the Romans fired him (at the request of Archelaus’ subjects).  He was banished to distant lands (notice:  he was not executed) and and were put under the oversight of the governor of the , whose name was Quirinius (verse 2).

and now came, for the first time, under direct Roman rule, instead of being administrated by native kings or tetrarchs approved by the Romans.  It was Quirinius who took the census of and in order to establish a realistic basis for taxing the people.

(When this census was taken — and it is the only Roman census of Judea on record — Jesus was already twelve years old, assuming with Matthew that he was born before the death of Herod the Great in 4 .  For the Gospel writer Luke, the imperial setting of Jesus’ birth was more important than precise chronology.  What people remembered about those times [80 to 90 years earlier] was the census that was taken at the beginning of direct Roman rule.)

The Birth.  As the Gospel presents it, it was this imperial census that caused Joseph to make a trip to Bethlehem, taking along his very pregnant wife.  Joseph had to go to because he was a distant descendant of the great king David, who had himself been a shepherd around (I Samuel -14).

Descendant of a great king or not, there was no room at the inn.  This little family is pretty humble, consigned in their great need to the barn with the animals.  (The reference to the “manger” establishes this.  That Greek word is used in the translation of Isaiah 1:3, where the donkey knows “its master’s crib.”)  The birth is told in simple terms.  “While they were there, the time came for Mary to have her baby.  She gave birth to her firstborn son, wrapped him snuggly, and laid him in a manger, because there was no room for them in the guestroom” (verses 6-7, CEB).

The real fireworks that do some kind of justice to the magnitude of the event take place out in the countryside, where a bunch of shepherds were on night duty, working where David had worked over a thousand years before.  A heavenly messenger (“angel”) appeared to these shepherds.  It became obvious that this was not something ordinary!  There is a blazing field of lazar light shining around this figure, which terrifies the shepherds.  As is standard procedure with heavenly messengers, the first thing said is, “Don’t be afraid!”

Then the messenger makes the ecstatic declaration.  “I bring good news to you — wonderful, joyous news for all people.  Your savior is born today in David’s city.  He is Christ the Lord” (verses 10-11, CEB).

The messenger adds that you can identify the right baby by a sign:  he will be found in a manger! 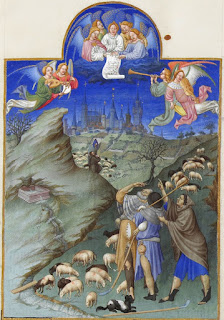 Then the Hallelujah Chorus breaks out — or more properly, the Gloria Dei Chorus.  A “great assembly of the heavenly forces” declares, “Glory to God in heaven, / and on earth peace among those whom he favors!” (verse 14).