Healing may have mysterious depths, but redeemed ones give thanks for a way to new life.

Unlike the previous Lenten readings from the Torah, this selection does not present one of the great covenant traditions from the Hebrew scriptures.  Instead we have a modest little text that seems to promote superstition and is basically devoid of literary charm.  We are reading it because the Gospel text for this Sunday refers directly to Moses’ action at the end of this story.

What this passage does do, otherwise, is take us into some murky depths of ancient religion.

Our passage is the last of the complaint episodes of the Israelites in the wilderness.  It is not said here that the Israelites “murmured” against Moses, but most of the marks of the murmuring-in-the-wilderness stories are here.  The Israelites are overcome by the difficulties of wilderness life so they cry out in complaint, denying that the Exodus was a good thing.  “The people spoke against God [very rare!] and against Moses [the usual routine], ‘Why have you brought us up out of to die in the wilderness?’” (verse 5, ).  The goodness of God’s whole enterprise through Moses is called into question.

Thus far this is just another rebellion story—not even a very interesting one, compared to the story about the lack of meat (Numbers 11:4-34) and of the Israelites’ panic before their enemies the Canaanites (Numbers 14).  Nevertheless, this complaint of the people is rampant rebellion and must be punished.

Suddenly the Israelites are afflicted with snakes with lethal bites and many people die.  As at other times (see ), when the people are punished they do an about face.  “We have sinned by speaking against the Lord and against you; pray to the Lord to take away the serpents from us” (verse 7).

The real point of this story, both in the history of religion and in the Lectionary selections, is what God does to solve the problem.  Following God’s instructions, Moses makes a bronze snake and raises it high on a pole above the people.  (Moses was involved with long poles and snakes, as well as power over disease [leprosy], since he first met Yahweh at Sinai, .)  When bitten by snakes, the people must look at this bronze serpent on high and they will be cured. 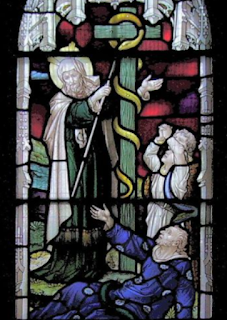 Biblical interpreters have long recognized that we have to do here with folklore about the relation between snakes and healing.  That relationship was also deeply entrenched in Greek religion and lore.  The Greek semi-divine healer, Asclepius, had as his “most constant attributes … the staff … and the snake, often coiled about the staff” (Oxford Classical Dictionary, 3rd ed., 1999, p. 188).  The insignia for the medical corps in the United States Army is two serpents twined around a vertical staff—continuing a tradition probably more than three thousand years old.  The Israelites viewed such a tradition as going back to Moses. 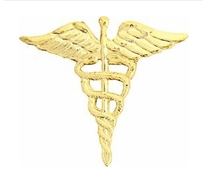 Nevertheless, the Israelites came to recognize the outright superstitious nature of this snake religion.  We have a rare documentation of this.  Shortly before 700 , Hezekiah, king in the days of the prophet Isaiah, led a major religious reform in , and Moses’ bronze serpent got purged.  The king “removed the high places, broke down the pillars, and cut down the sacred pole.  He broke in pieces the bronze serpent that Moses had made, for until those days the people of had made offerings to it; it was called Nehushtan” (II Kings 18:4, ).

In the long run, Israelite religion replaced the old superstitions with more monotheistic and prophetic worship and faith.  Moses’ bronze serpent was from then on only symbolic, ready for the treatment it gets in this Sunday’s Gospel reading.

The Psalm selection is from a long litany on behalf of those who have become “the redeemed,” that is, those delivered from various kinds of danger.

This is the sort of redemption that reunites family members after falling into slavery or oppression at the hands of foreign powers (the verbal root is gā’al, as in Job’s “I know that my Redeemer lives,” , ).  The psalm assumes an assembling of peoples from distant places (verse 3), gathered at the temple at some festival time.  They are all summoned to give thanks for the redemptions they have experienced.

The main passage of the selection (verses 17-22) recites the experience of those who were delivered from sickness unto death.  The sickness is seen as resulting from “sinful ways” and “iniquities.”  After the sick ones cried out to God to save them, God “sent out his word and healed them” (verse 20).  (God’s “word” replaces the magic of the bronze serpent.)  The recovered sick ones are then called to join with the other redeemed groups in giving thanks to God with sacrifices and songs.

The basic pattern is simple:  faith in God in the midst of the most desperate trouble, hammering on God’s attention with cries for help, and finding deliverance so that one lives to tell about it!

The Epistle reading is one of those luxuriant passages in the letter to the Ephesians which pack together rich and complex phrases and concepts in a kind of massive snowball effect.  This one turns on an axis that runs from death-in-sin to new-life-in-the-exalted-Christ.

To be in trespasses and sins is to be dead, to be caught in the power of “the ruler of the air,” to be possessed by the spirit of “disobedience.”  It takes an act of God to deliver anyone from this power of sin and death.  And behold! there has been such an act:  “by grace you have been saved” (verse 5, ).  The decisive act was carried out when Christ was made alive and seated on the heavenly throne.

This way of understanding God’s act places great emphasis on the believers being included in the cosmic arc of the Christ.  As he was elevated to a heavenly throne, those taking him as Lord are lifted with him to a heavenly life.  God “raised us up with him and seated us with him in the heavenly places” (verse 6).

And then we hear that distinctively Pauline declaration that echoed strongly many centuries later (from Martin Luther):  “For by grace you have been saved through faith, and this is not your own doing; it is the gift of God—not the result of works, so that no one may boast” (verses 8-9).

This kind of sovereignty of God over what each of us has become is carried yet further.  “For we are what he has made us, created in Christ Jesus for good works…”  To live in that new resurrected state is to be engaged in good works.

We are not saved by good works, but we become instruments of good works because we are in Christ’s risen body and included in his heavenly reign.  This is such an awesome viewpoint that the writer can only believe it was designed in God’s own eternity.  These are good works “which God prepared beforehand to be our way of life” (verse 10).

The Gospel reading, continuing in the Fourth Gospel, makes direct reference to the bronze serpent in the wilderness contained in this week’s Torah reading.  As Moses lifted up the serpent, so it is necessary (Greek dei) that the Son of Man be lifted up, SO THAT everyone putting faith ( “believes”) in him may have eternal life (verses 14-15).

This is part of the first of the discourses (as opposed to short sayings) by Jesus in the Gospel According to John.  This discourse began when the Pharisee Nicodemus visited Jesus at night.  Jesus has talked about being born from above and living as the Spirit moves.  As their dialogue moves to a conclusion, Jesus declares (verse 13) that the Son of Man who previously descended from heaven will in turn ascend again to heaven—and that was the meaning of the bronze serpent elevated by Moses for all the people to have faith in.

In the first instance, the elevation of the serpent represents Jesus’ crucifixion, being raised on the cross.  In the second instance, it refers to Jesus ascending to rule all powers from on high.  All who believe in (= have faith in) Jesus’ identity as the Son of God crucified will “have eternal life” (verse 15).

This statement in verse 15 is the first occurrence in this Gospel of the phrase “eternal life,” a dominant concept  and the approximate equivalent in John to “the Reign (Kingdom) of God” in the other Gospels.

The timelessness suggested by “eternal” may distort somewhat the ultimate salvation envisaged in this Gospel.  The apocalyptic writers of the time spoke constantly of two ages:  “this age” and “the age to come.”  Where the Hebrew text of Daniel speaks of “the age to come,” the Greek translation has exactly John’s phrase, “eternal life” (Dan. 12:2).  Eternal life is the equivalent of the consummation of the ages; it is the ultimate fulfillment of all the ages.  In John, the bronze serpent meant not simply cure from snake bite, but the salvation of life in a new age.

This part of Jesus’ discourse with Nicodemus (starting at verse 11) ends with verse 15.  There follows, from the Gospel writer, what must be the most frequently quoted verse in the New Testament, , “For God so loved the world…”  Here is the climax of the Evangelist’s inspired teaching about the incarnation as God’s effort to save the world.

This incarnation is at the same time the occasion for the world passing judgment on itself, depending on its response to the Son (verses 17-18).  The continuing message of Jesus’ passion—lifting up of the serpent that became the sign of healing—is the judgment of the world.

Those who empty themselves to be included in Jesus’ passion have been healed from serpent-bite, have made the transition to a new age.