Today’s readings present God’s requirements of God’s people, first in the revelation at Sinai (Ten Commandments), then in hymnic praise (Psalm) and as opposed to human wisdom (Epistle).

The readings climax by transferring what God requires from a temple establishment to a suffering but exalted Lord.

In the sequence of covenants during this Lenten season, the Torah reading presents the supreme moment of Jewish faith, the covenant between God and made at Sinai.  Included here is the heart of the Sinai covenant, the Ten Commandments.  Only God’s direct statement of the Commandments is given; the context is left for another reading.

Concerning a many-faceted text, we offer only a few key observations.

·        The Ten Commandments are addressed to each person individually.  Every one of the “you” and “your” pronouns in the Hebrew and the Greek are singular.  God says, “I brought you (personally) out of … You (personally) will have no other gods…”  The ten requirements are the individual responsibility of every person who ever stands within the Sinai Covenant.  (In the ancient setting, the persons addressed were presumed to be substantial heads of households.)

·        The wording of each requirement is not in the form of ordinary commands.  The imperative form is not used.  It does not say, “Do not murder”; it says “You will not murder.”  The statements are in the indicative mode (indicated in Hebrew by the type of negative used with the verb).  Grammarians long ago created a special “solemn” type of usage to account for these “commandments” in the indicative mode, but in a normal context they would read simply as statements of fact, not strictly commands.  You were brought out of slavery; you will not have other gods…  The ethos (and rhetoric) of the Ten Commandments is that of an elect people:  (Being who we are,) we do not murder, we do not steal, etc.  The conduct of an elect people can simply be stated; it does not need exhortation.  (The two positive commands, Keep the Sabbath [verse 8] and Honor parents [verse 12], are also not in the imperative mode.  They use what grammarians call the infinitive absolute, a kind of verbal noun, giving something like, “[There will be] keeping of the Sabbath…”)

·        In some earlier form, the Decalogue probably consisted of ten simple statements, which could be ticked off on one’s fingers.  With the passage of time and shifts in emphasis, certain requirements needed reinforcement and elaboration.  The requirements so elaborated are the second, you will make no idol, three verses long (verses 4-6); the fourth, you will keep the Sabbath, four verses long (verses 8-11); and the tenth, you will not covet your neighbor’s household, one longish verse (17).  Brief motive clauses—reasons for observing the rule—also expand the requirements concerning the use of God’s name (verse 7) and honoring the parents (verse 12).  In later centuries, the two requirements with the fullest elaboration, avoiding Idolatry and Sabbath observance, became the most critical public touchstones for being faithful to the God of Israel.  For those two commandments, Judean people often suffered persecution and even death.

The Psalm reading includes at its center a strong praise of God’s torah, the content of the Sinai covenant.

The whole psalm begins with a marvelous praise of God manifested on the visible heavenly vault.  The sights of the heavens are acclaimed as speaking praise of God.  Special delight is taken in the sun, who runs his daily course, observing all on the earth. 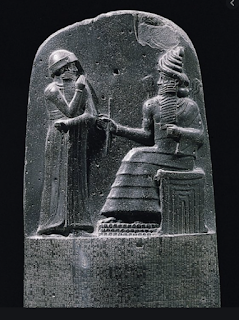 Old Babylonian tradition, centuries before Israelite times, associated the sun god with the giving of law (for example, in the graphic at the top of Hammurabi’s famous stele).  This psalm makes a similar transition from the sun, from whom nothing is hid, to an elaborate praise of the torah of the Lord.  The middle section of the psalm (verses 7-10) uses six synonyms for law or torah, each of which is praised in terms of its life-enhancing qualities, a remarkable hymn to torah-devotion.

But the psalm moves on to a third section (verses 11-14), in which a deeper mystery of personal existence is acknowledged.  Keeping the law is good, but who can fathom the real depths of the self, its “errors,” its “hidden faults”?  The conclusion leads the psalmist to a fervent prayer that God will deliver the speaker from such deep powers, so that one may be blameless and innocent.  May the speaker’s words and meditations be acceptable in God’s sight!

This single psalm has an astonishing sweep:  from God’s glory sung in the heavens, through the richness and life of God’s law, to the human depths where transcendent powers threaten.

It is a blessing to receive the law, yet dangerous to fall guilty under it!

Paul insists that human wisdom is not only inadequate, it is wrong-headed.  It is utterly misdirected.  What looks like wisdom to humans is foolishness, at least when what we need is salvation from sin.  God’s true wisdom, brought to humans in the crucifixion of Jesus, looks like a scandal to Judeans and foolishness to Greeks.

The real meaning of Jesus’ Passion is simply not sensible, not reasonable, not intelligible to folks of any education.  Thus Paul finds that he must preach Christ only, and that means Christ crucified (see 2:1-2).

For several weeks in Lent and during Holy Week, the Gospel readings are taken from the Gospel according to John.  This Sunday’s reading presents an episode that in the other Gospels occurs in the last week of Jesus’ activity in , the cleansing of the temple.

Besides the Ten Commandments, at Sinai God gave instructions for a special sanctuary that would enshrine God’s presence among the covenant people.  In the wilderness that sanctuary was the Tabernacle (described in ); in the settled land it was the in (I Kings 6-8; II Chronicles 2-7).

How was God’s sanctuary doing, since Sinai?

Not well at all, according to the account in John’s Gospel.  John’s account of the action, with Jesus making a whip, overturning the money tables, and chasing out the bird dealers, is more graphic than is this episode in the other Gospels.  There is emphasis on Jesus’ prophetic zeal, the messenger of God’s will driven to violence by the scandalous conditions in the holy house.  The prophetic reformer is breaking forth at the center of the religious establishment!

Reform, however, the passage recognizes, will not effect a lasting solution.  “Zeal for your house will consume me,” the disciples later remembered from one of the psalms (Psalm 69:9, quoted here in verse 17, ).  The quote that they remembered does not refer to reforming the temple worship, but to the death that the reformer’s work brought on him.  Caring for God’s true presence among people will cost Jesus his life.  (Psalm 69, quoted here, is, like Psalm 22, a passion psalm.)

The passage carries further, in an astonishing way, the ramifications of Jesus’ role in God’s salvation.  Being challenged by the officials, Jesus declares, “Destroy this temple and in three days I will raise it up” (verse 19).  This opens up, of course, a post-resurrection perspective.  Jesus has switched from talking about the physical temple built by Herod the Great (destroyed in 70 CE, before this Gospel was written) to talking of his own body as the .  That is what will be raised up in three days, and after that event, the disciples will understand what these conflicts were all about.

The body of Jesus will become the true temple by which God is present.   To this temple may come those who continue to need the release from sin that the temple used to provide.

For this Gospel, the requirements of God have been simplified to this:  one is called to believe in Jesus and let the Spirit lead each one into a corporate life that is the new Tabernacle of God.  This will prove to be a spontaneous and charismatic life (the spirit moves like the wind, John 3:8!), filled with statements of fact rather than imperatives.